I think my shoes are still wet from the rain in Copenhagen. The rain kept us inside the hostel last night, which can be an awesome thing sometimes. We grabbed some cheap pasta salad and baked treats from around the corner, and sat in the hostel common area for 8 hours, haha. But you meet the most interesting people in hostels! We sat at the table talking for hours with a guy from India, his cousin from India who lived in Scotland but now lives in Germany, a guy from Florida, a girl from Iceland, and her Italian boyfriend who moved to Iceland to be with her. What a lovely mixture! We talked about anything and everything–from eating seals, sharks, and sheep, to how Jess apparently dresses like she’s going to a Black Sabbath concert. (?!!??!?). “I hope you’re not wearing THAT outfit to the One Direction concert”. It might have been the cross earring, we’re not sure. I know I compare Jess to Ozzy allllll the time. Hahaha. It was a night-in well spent, that’s for sure.

This morning we caught a flight from Copenhagen to Basel (which, if I’m not mistaken, is located right where Switzerland meets France meets Germany? There were signs inside the airport for exits to all three countries, haha).  From there, we took the train to Lucerne.

And wow, Switzerland is picture-worthy. It looks just like we imagined it would–like something from a children’s storybook. Were Hansel & Gretel Swiss?? Or were they German?? Neither?? Either way, Lucerne makes me think of fairytales. A CHOCOLATE fairytale. I’ve never seen so much Lindt chocolate in one place before. Which totally makes sense since it’s made less than an hour away. But so many flavours you just don’t get in Canada!!
Tomorrow will be for exploring Lucerne…and eating chocolate. 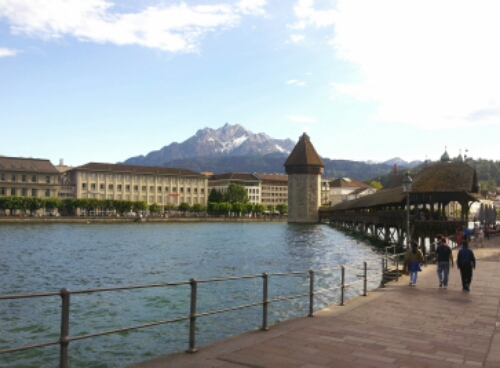