Europe is old. I mean that as a compliment.  Seriously, when’s the last time you saw a 16th century castle in Newfoundland? We were barely even discovered at that time, let alone building castles. Even the city skylines are completely different over here.  Flying into NYC or Toronto is not at all like flying into London. You walk around the center of London or Dublin and you can actually see what’s around you. Manhatten? Not so much. They’re all awesome, just different.

Back to the castles. Yesterday we spent our last day in the Galway area on a sightseeing tour of The Burren.  We’re driving along, and castles (or what’s left of them) just keep popping up every few minutes. “To your left, there’s a castle”, “And over here, there’s another castle”, “See that tower in the field? Yeah that used to be a castle”. They’re like moose on the Newfoundland roads. Only much nicer to look at. And these castles are OLD. 16th century old, or older. That’s fairy tale stuff to us. (Or the stuff of history books, depending on what you’re into).  It almost makes you blink a few times, just to be sure what you’re looking at is real.

During the middle of the bus tour, all of the castles were owned by the O’Brian family. Honestly. It was like five castles in a row for them. That must have been a powerful family right there. I would not be sitting down to a game of Monopoly with those folk. Guaranteed they’d have the blue ones, the green ones, the yellow ones, and the red ones. All with hotels.

On another note, the tour also took us through the town of Lisdoonvarna, where they hold a Matchmaking Festival every September. I kid you not. We were told that back in the day, the farmers would come down from the mountains for two weeks during the summer in hopes of finding a wife. If they didn’t, well, it was up to the mountains until next year.  I’ll bet the O’Brians got first pick. The town even has an official Matchmaker. (Before you go and book a flight over, you should probably know that his wife left him a couple years ago.) (Or you could still come over and pray you run into an O’Brian). 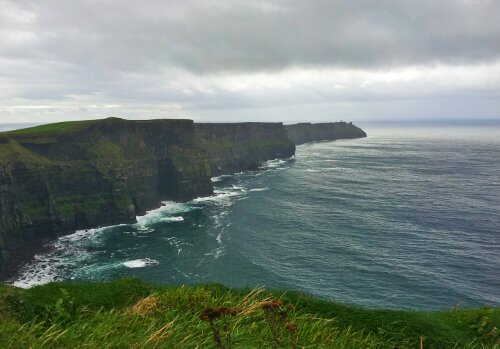