Our time in Dublin got reduced drastically as a result of yesterday’s shenanigans.  Basically, we had a single day to see the city.  We spent an hour and a half on one of those hop-on hop-off city bus tours, so we could at the very least SEE the sights of Dublin. It feels like we were in general proximity of Guinnessland for at least three-quarters of the tour.  Okay, that may be a slight exaggeration, but that place is huge. Pretty sure the tour guide said sixty-five acres. We opted against the tour of the factory, and instead roamed the main streets of Dublin.  (And really, how hard is it to have a Guinness in Dublin? I was a little surprised it wasn’t on the menu at McDonald’s). Jess and I both loved the Temple Bar part of town. So many quaint and colourful bars, pubs and alleyways. And were those cobblestone streets?! It was sort of like George Street times twenty other George Streets plus an infinite amount of Guinness.

Speaking of Guinness, we later grabbed at seat at Whelans and ordered a pint each.  Seriously, how do the Dubliners do it? God bless ’em. I should have asked for a shot-sized sample. Jess is a trooper–she finished hers like a champ. 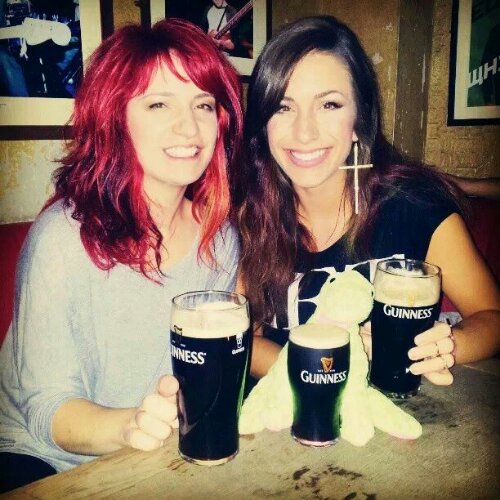